The recent death of Clark Ewing has prompted a spate of reflections from many people in many venues. His Granddaughter Claire posted a story on Facebook the other day. It brought to my mind Clark’s use of the phrase, ‘Mum’s the word.’

Claire’s story had to do with Clark being designated as the responsible adult while Claire’s Mom and Dad were away somewhere. Clark being Clark found a way to be naughty with the youngsters without putting anyone in danger.

(This isn’t really my story as I heard it all second hand from my children years later. Perhaps Jeremy can chime in with refinements or clarifications.)

In our house when the children were young we didn’t have sweets very often. In particular, ice cream was rare because their mother had an allergy to it. Clark loved ice cream. One of the traditions at Camp was to go into Jackson to the All Star Dairy where the signature attraction was a concoction called ‘Dare To Be Great’.

‘Dare To Be Great’ was 21 scoops of ice cream and nuts and whipped cream and . . . you get the idea. This was all before Clark had to have quintuple bypass surgery . . .

Anyway, the kids told me that when Clark was out in California visiting us, he would pick them up from school then stop at the ice cream shop on the way home to buy them all ice cream cones. He explained to them that they could never tell their mother what they had done. ‘Mum’s the word,’ was the code phrase for talking about it when they were in her earshot.

I suspect there may have been other transgressions because I heard that phrase a lot in those days.

Clark Ewing, the other grandfather of my children, died this morning. It ‘s been a tough couple of months for Jeremy and Sarah. I’ve been thinking about the similarities and differences between the two men.

Clark was three years older and started his family sooner, so he had had his fourth child before I was born. Both men worked hard establishing themselves and their families in the 1950’s and were firmly established in the suburban middle class by the end of the decade. Both came from rather conservative Christian backgrounds and moved to more liberal interpretations as they got older.

Both were active in their respective churches but the nature of their activity reflected their personalities. Dad taught Sunday School and edited the newsletter. Clark led public campaigns.

Dad eventually branched out from the Church activities and became active in the Movie Club and some local charities. Clark was a member of Rotary Club and was prominent in the Toledo YMCA.

I believe Clark’s greatest achievement was his stewardship of the camp run by the Toledo Y in southern Michigan. I tend to refer to it as a ‘summer’ camp, but in reality it was a year ’round operation at the time I came into the family in 1981. Clark had been director for many years by that time. He was passionate about the place and had been instrumental in expanding into its current state. He was not shy about talking about where he thought it should go from there.

Where Dad was solid and careful; a craftsman, with hidden talents, Clark was ebullient and was the first to stand up and say ‘Follow me!’ Perhaps some might say he moved too fast, or reached farther than he could grasp, but he relished the challenge.

At Dad’s funeral, we had a hundred or so people attending. A dozen or so spoke afterwards and were highly complimentary. As word of Clark’s death goes out, there will be thousands of men and women who will reflect back on their experiences with Clark and know how he influenced them positively. Many will travel to Michigan, I predict, to participate in whatever memorial is planned.

Neither is better than the other. We all take our paths in life influenced by opportunity and our own personalities. Both are being mourned by their families and many others. I am the child of my father. He influenced me more than anyone else. Clark showed me another way, and influenced my children profoundly as well. I am happy to have known both men.

I found a little appreciation I wrote about Clark a couple of years ago. Here it is.

I checked around and I was surprised to find that I hadn’t mentioned this fund here before. I guess it was kind of passé by the time I started writing here.

Anyway, I happened to think of this fund the other day and today I wrote a check to it. I never saw any accounting of the donations so I hope it’s all legit. Actually, YMCA Storer Camps is legit and so are the people running it so I have no real worries.

The fund honors not only Zach but also his grandfather Clark. It provides money for kids to go to camp (‘camperships’) who otherwise couldn’t afford it. Storer, and Clark Ewing, were huge reasons why Zach was the great person he was.

So if you’re looking for a charity to send money to, consider this one. 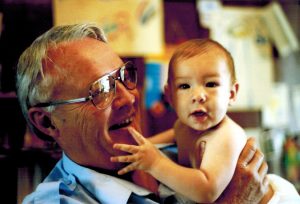