Well, we had it last weekend. The work weekend, where we picked up the slack for Zach. Quite a few people came: family members, LSU people, Greenville YMCA people. All in all there were over 25 people involved.

I took the red-eye out of SFO Thursday night, arriving in Atlanta around 7 in the morning having slept only a couple of hours at most. Sarah had come in the night before, so she was there. A group from Baton Rouge led by Micah and Julie came about noon. Ashley got home from work about 3:30 and by 4 we were on the road to South Carolina.

Despite promises being made, no one was at the camp when we arrived. The cabins were open and the lights worked but otherwise it was deserted. There was no cell service up on the mountain so reaching people was tough.

Jeremy persevered, though, and after about an hour he got through to someone who told us the director had a family emergency and had to leave. We got the info on where to sleep so we got settled before dark. Ally arrived about 9 with Noah, having done all the driving from Cincinnati. He came into the kids cabin just in time to interrupt Rosalie from getting to sleep. They were glad to see each other.

After that, Jeremy got a campfire started and more people I didn’t know started showing up in the darkness. Soon, stories of Zach were being told. I had the foresight of bringing my little hand held recorder and I let it run for a solid 45 minutes while stories were told around the campfire.I gave up around midnight. There were a few hardy souls still there.

The next morning after breakfast, everyone headed out to ‘Zeke’s Place’ to see what we were up against. Here’s what we found: 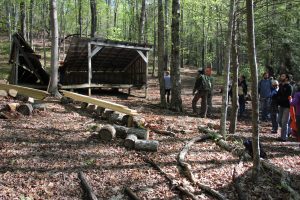 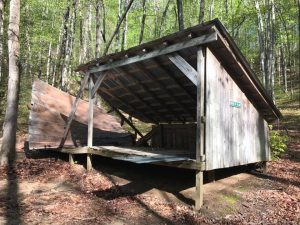 Before we started work, Jeremy got everyone in a circle and we all spoke briefly of our relationship to Zach. Ashley used her lovely phrase, ‘Brother-in-love,’ to refer to Zach. One of the Greenville people – I don’t remember who, but male – said they had a crush on Zach. That was after one of the women said the same thing, to knowing nods all around. 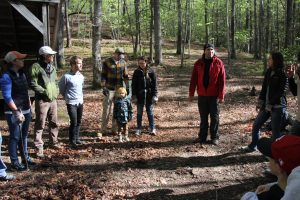 Then, to work. Noah jumped in and helped as much as he could. 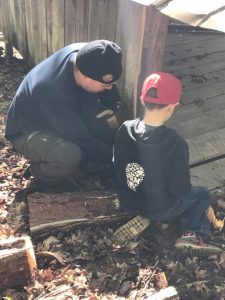 We broke for lunch and returned to an afternoon of rain showers but the work continued steadily. We weren’t quite done when it was time to go to dinner, but some elves left quickly after dinner and went back to finish the roof before the light faded.

The next morning, almost everyone reconvened at the site for a celebratory picture. I never heard who Zeke was but heretofore, it will be known as ‘Zach and Zeke’s Place.’ 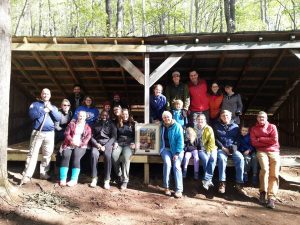 Before that, on Saturday, there was an important other celebration to have. It was Noah’s birthday! Ashley had made a cake and someone – I never found out who – went into Brevard for Dolly’s ice cream. Gifts were given and songs were sung; cake and ice cream was eaten. 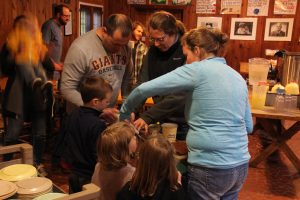 YMCA Camp Greenville has a chapel called ‘Pretty Place’. It’s where Jeremy and Ashley had gotten married nearly ten years ago. I never felt that ‘pretty’ was the best word for the spot. It’s much better than pretty. Anyway, Jeremy had encouraged everyone to come out to Pretty Place for the sunrise Sunday. I had heard 6:45 but when I got there about that time, the sun was already up and many people were already there. After the rain the day before, Sunday had dawned clear and warm, but pockets of fog were in the valleys below.

After snapping a couple of pictures, I sat down next to Sarah and took in the fabulous view and thought of the wonderful people that were there with me, giving some extra for Zach. I completely broke down.

This came in my email today:

**I apologize if you’re receiving this message through more than one channel. In an effort to reach a lot of people, I’m sending it to as many contacts on Facebook and email as I can think of. I’m sorry if I accidentally doubled up and spammed you.**

I hope this finds you all well. I first and foremost want to thank all of you who have reached out to my family and I to offer support and condolences in the year since we lost our beloved brother, son, uncle, cousin and friend Zach. I’m deeply appreciative for all those who’ve been able to offer support through their own grief. I’m continually amazed at the impact of Zach’s life on so many disparate people.
I’m writing to let you know of a project that’s been in the works for a long time, and am happy to announce it’s finally happening. As most of you know, Zach was a camp counselor at YMCA Camp Greenville in North Carolina for one summer; while the demands of school and life precluded him from returning to work there, the experience impacted him profoundly and he often spoke warmly of his memories there. Last fall, one of Camp Greenville’s backcountry camping shelters was destroyed by a falling tree. With the invaluable assistance of longtime camp director Greg McKee, we’ve arranged to “pick up the slack for Zach” by holding a service weekend at camp in Zach’s memory, with the primary goal of rebuilding the shelter and renaming it “Zeke’s and Zach’s” (the original name of the shelter was Zeke’s Place).
The project will take place the weekend of May 5th through 7th (Friday–Sunday) at Camp Greenville. The very tentative schedule is to rendezvous at camp Friday night, work all day Saturday and hold a remembrance chapel at sunrise Sunday morning at the Pretty Place chapel before we part. We will stay in cabins at camp on Friday and Saturday nights.
I live in Atlanta, and will coordinate travel from there to camp and back for as many people as necessary. Likewise, we will do everything we can to accommodate folks who come from out of town and need a place to stay for an extra night.
I understand that the travel will be untenable for many of you. If you would like to help but cannot make it that weekend, we also need to raise approximately $2,000 for the building materials for the project. Any extra money we raise will be donated to camp’s scholarship fund in Zach’s name.
Please let me know as soon as possible if you will be able to come, or if you’d like to help with a donation. I very much look forward to remembering Zach for a weekend with you. Please contact me at (404)895-5325 or jeremy.wood.820@gmail.com. Also, please forward this message to anyone who I don’t know who would like to participate in Zach’s memory.
Much love,
Jeremy Wood 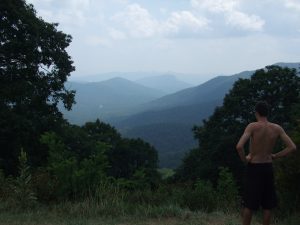