Leni Herges was born in Cologne, Germany on August 4, 1917. According to my copy of Family Tree Maker, she is the wife of my 2nd cousin once removed. FTM says Wilfried, her son, is my 3rd cousin. Wilfried’s great-grandfather and my great grandfather were brothers. I guess you could just as easily say that our great-great grandfather was the same person

It’s very confusing so I call everyone there my cousins. Mary Beth and I went to Germany to celebrate Leni’s 100th birthday. When I got to her house, and in her presence, I was tongue-tied. What do you say to a 100 year old person when you can speak their language? I have a little German but it deserts me when the pressure is on.

Leni was like a Sphinx. She didn’t say much to anyone. Her daughter Marlies (also my 3rd cousin!) keeps an eagle eye on her and whisked her away to her room if she showed any signs of being tired.

Now it’s funny: I have a picture in my mind’s eye of her sitting at the table with her eyes closed or otherwise disinterested, but in all the pictures I can find of her from this trip she looks pretty lively. Here’s a nice picture of a group of us: 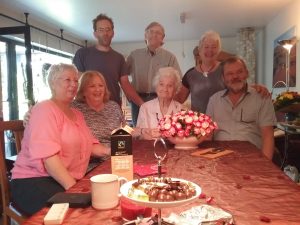 There is one picture from the dinner that’s along the lines of what I’m talking about. As you might imagine, Leni gets tired as the day goes on. Mary and I had gotten to her house in the afternoon and there were a bunch of people there, all talking and drinking wine. Then, to get to the dinner, Marlies had hired a limo to take the immediate family. That was a scene getting everyone in. 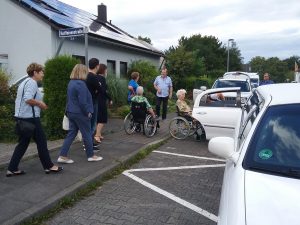 At the other end, everyone is getting out and of course, we have to get a picture. 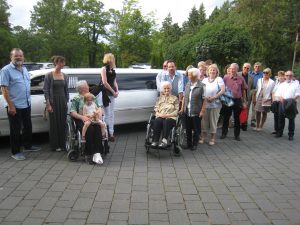 Then, inside to the dining room. More wine, appetizers, singing of songs (evidently the German version of Happy Birthday, which I never found out what it’s called) and finally, a speech. Wolfgang happens to be the Burgermeister of Berkastel-Kues and a relation of Leni through her father’s family. He went on for several minutes (in German, of course). It was very respectful and at times funny, but Wilfried captured this while Wolfgang was speaking. 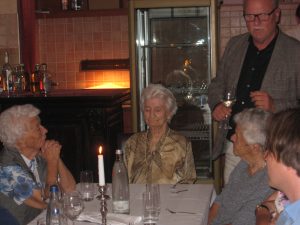 The next morning some of us gathered again at Marlies’ before heading our separate ways. I happened to be looking at Leni when Julia came in. Julia is Leni’s great-granddaughter and 2-1/2 years old. Leni lit up when she saw her and gave her a big hug.