Last fall, on the first day after Sepi’s tenants moved out of her house, I took out all the carpeting, including the stairs.

Over the next several weeks, I put in the new bamboo flooring in the upstairs living area and we moved furniture in.

Our intention was to do the stairs with the same material but it developed that there was a problem. The bottom four steps of the staircase widened out and had a curved edge. The bamboo nosers sold by the flooring company were not available curved.

Not only that, but using the floor pieces for the riser facing was problematic for the same reason: they couldn’t be bent.

After going around and around with installers from the flooring company, we decided to take another path.

We found a man whose specialty was stairs and he agreed to do the job.

About this time, the water supply on our refrigerator leaked and thus began a nearly two month saga of repairs on our house. The stairs were put on hold during all this.

We moved back into our house – we had been 5 weeks in a local hotel – just before New Years’. Our stair guy came over and went over his plans with us. To match the bamboo with wood that could be more easily worked, Ben suggested that we use white oak, quartersawn. He knew a guy who he said was a master of staining and could match the bamboo color on the white oak.

Then, weeks went by with a word from Ben. When we finally called his work number, we heard a message that said he had gone into the hospital and was not going to be able to work for two more weeks. This happened several more times. He did finally call us back but the time frame for his return to work kept stretching out. It did not seem to occur to him to take a couple of minutes to call his clients and tell them what was going on.

So, long story short, he finally started on April 30th. The work was good, although he made a couple of decisions that I felt were poorly considered. One was that he put on the bamboo noser at the top of the stairs with glue, screws and nails leaving huge divots in the wood. He said Ralph, the stain guy, could fix it. Ralph had to replace it.

The other issue was at the bottom of the stairs where the rounding was. The original curves had been cut rather sloppily. As it was then covered by carpet, it wasn’t such a big problem. When it became bare wood, it was. Ben seemed a bit puzzled when I asked him to fix it. It still isn’t right, but it’s better. 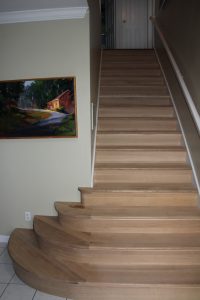 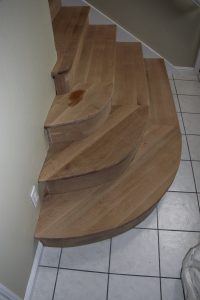 Most of the time, no one will notice it. To be fair to Ben, I think he got a little too caught up in the weeds of matching the original curves to step back and look at the big picture.

So, now Ben is done and Ralph is staining. He started last Monday. At this writing, he’s not done yet. First, he didn’t make it dark enough. Then, he complained that he couldn’t get the proper pigment at the paint supply. I suggested that he look at art supply stores. This proved to be a success. Ralph, at least, has been good about keeping us informed of what he’s doing, even telling us all about his aunt who had to go in the hospital last weekend. Today he went to pick up some more pigment for the putty but the stuff that they brought was wrong (at the flooring supply). Tomorrow they are supposed to have the right stuff.

He has put one coat of finish on it so he says it’s ok to walk on. For three days, we had to enter the house by going up the side and around the back to the kitchen deck. It’s actually worse than it sounds. Of course it was raining.