I had one gift in mind when I wrote that title since the two items came in one box. After I wrote it, though, I thought of the larger sense of it. Rosalie’s gifts are many!

But today I am speaking of two gifts that came in one box about a week ago. A coffee (or, in my case, tea) mug and a little ‘Z’, also ceramic.

The mug has ‘I ♥ Grandpa’ worked into it. The base color is white but there are colors spread around on it by a young hand. In fact, the hand itself is well represented on the side opposite the slogan. On the bottom are the letters ‘AR’. What? Well, Jeremy told me that they asked Rosalie to write her name on the bottom. That would be tough for anyone using a finger full of paint. She managed the R and the A. OK!

The ‘Z’ I thought was commercial but Jeremy told me she decorated it as well. It is black with red polka dots. It’s from the same font as the ‘Z’s on magnetic paper that Mary Beth first came up with (and the logo for this blog).

My first thought was to hang it up in my apartment so I could see it someplace where there wasn’t already a magnetic ‘Z’. But before I got to that it was sitting on my table or on the kitchen counter and I liked the feel of it as I moved it about.

So I gave up on the hanging idea and now leave it in places where I will see it every day. I pick it up and roll it in my hand and think of Zach and Rosalie. 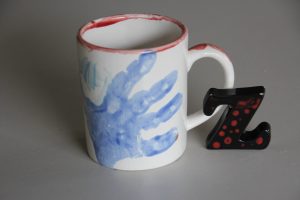