A couple of weeks ago I re-posted a picture Micah had put on Facebook. It’s in this blog post.

Then last week I saw an article in the SF Examiner about ‘ghost bike’ memorials. You can read it here. What caught my eye more than the headline was the picture. 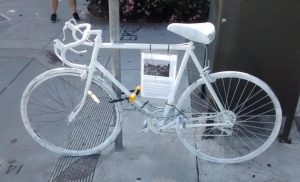 Now I understand the lineage of what Micah (or Jake) was doing. There are a lot of important issues facing Americans these days and maybe this isn’t the most important but it’s important to me. Almost every day I see drivers doing dangerous things. They run the gamut from changing lanes without using turn signals to running red lights. I mean really red. I often see drivers rushing to be first on merges, too.

It all stems from people thinking they need to get somewhere now. Really, folks, what’s the rush? Three quarters of the time I see a guy (or woman) slide through the red right turn from Linda Mar to Highway 1 without stopping – or sometimes without even slowing down – I pull up along side then at the next light. Are you late to work? Late to getting the kids to school? Going to the grocery store? Hurrying home with your Chinese take out?

Whatever it is, it it worth killing someone? Yeah, I know, you’re a careful driver. I’m sure Shawn R. Allen would have said he was a careful driver before November 14th last year. Maybe he still thinks he is. 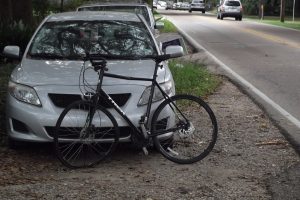 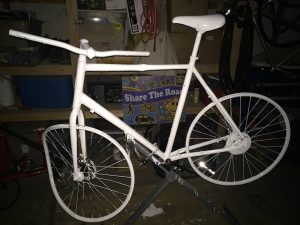 So far I’ve been reluctant to put up anything like progress reports on my efforts to understand what happened in Baton Rouge on the evening of November 14, 2015. Many people have asked me what I want. I’ve always felt, and I still do, that revenge is not the path to follow. Zach is dead & nothing can change that most important fact.

I am unhappy with almost everything the officials of Baton Rouge did – or more precisely didn’t do – in their investigation. Their conclusion that Zach was at fault for entering the street when he shouldn’t have makes me want to scream. Seemingly, everything hinges on the fact that Zach’s Blood Alcohol Content (BAC) was measured at 0.125%. The driver had a BAC of 0 so he’s absolved, goes the narrative. Never mind that he was rat racing another guy to be first past the merge. He got a speeding ticket, BFD.

This subject did come up last weekend, at the breakfast in Grass Valley. Emily spoke very clearly about similar incidents that had come to the attention of she and Zach. She said Zach was willing to see all sides and was generally forgiving of the one most of us would see as the transgressor. Ashley echoed my feelings when she said that she thought the driver should be punished with something more than just a speeding ticket. I asked her specifically what & she said, ‘Prison time.’

Nancy & I both looked into civil suits. She wanted me to join with her but I declined. I consulted another lawyer who eventually got back to me and said the insurance was ‘only’ $15,000 & I would have to share that with my ex-wife. So evidently their M.O. is to jack up the insurance company. They’re not interested in real questions of responsibility.

I consulted yet another lawyer and said I would pay up front to have my questions answered. He sent me to an accident reconstruction specialist who essentially declined to take the job for a variety of technical reasons (he was at least nice enough to explain to me why). The lawyer also suggested that I contact the Baton Rouge District Attorney’s office. He said they generally very responsive to bereaved families.

The title of this post comes from the interesting fact that the DA lawyer didn’t have a copy of the coroner ‘report’. I said I did and would send it to him, which I did this morning. I call it a ‘report’ because it is two sentences long. Reading it and trying to read the police report again gave me the impetus to write this post.