Yesterday the weather was cooler, but I stayed indoors most of the day. I wrote a couple of posts, one of which had to do with the bereavement group, The Compassionate Friends, that meets the first Tuesday of every month in Santa Clara.

I said it didn’t ‘hold appeal’ for me. One of the reasons is that they have a kind of a ceremony they do at the start of every meeting. They light candles and recite first the birth dates and then the death dates of those now gone for that month. When I stopped going to my original bereavement support group early this year, I felt that there was too much emphasis on sorrow and not enough on looking forward. I told my Rosalie story to them . . .

( I just went and looked. I was sure I had posted my Rosalie story but I can’t find it. Essentially, it’s the fact that she knows about Zach and what happened but she doesn’t let it interfere with the business of living life to the fullest.)

. . . and it didn’t seem to have any effect. Well, why should it? Perhaps I should have given it more time, Perhaps grieving is different for everyone and that’s not their style.

At The Compassionate Friends, I found a group that fit my mindset a little better. Their stories were all stark, like mine, of lives ended before their potential could be reached.

But the dates thing has bugged me. So far, neither of Zach’s dates have come up but I’ve found myself wondering what I would do when they did. Would I skip those months? I know early on, anniversaries were important to me. Now, the loss of Zach has all settled into a kind of dull ache that flares up every so often. Plenty of things remind me of Zach without adding reminders of his death date.

On the other hand, there was a moment last spring at the Compassionate Friends when I thought I could see myself as a kind of elder who could support those whose grief was fresher. Looking ahead to my schedule for the rest of the year, all the first Tuesday evenings are impacted one way or another. I don’t think I’m invested enough to make a heroic effort to get down there. Pace Virginia and Don.

All the bereavement support groups meetings will stay on my schedule so it’s possible I will go to another one this fall.

I went to the South City bereavement group yesterday. I had gone quite a bit last year but fell away from it last fall. The regular facilitator, Tracie, wasn’t there which disappointed me. I felt she was a big reason why the group was successful. I remembered about half of the people there from before. One woman whose 15 year old son jumped off the Golden Gate Bridge was approaching the second anniversary. Everyone else had lost a parent or partner to age or illness.

I guess I was in a manic phase, because when it my turn to speak, after narrating the bald facts of Zach’s death, I spoke about Rosalie and her positive approach to life. At no point was I near tears as many others were when telling their story.

It struck me that some who were long time attendees were perhaps thinking too much about the past and not enough about the future. It sounds cold but I am only speaking in relation to me. Their grief is theirs and it is not for me to prescribe their reaction to it.

Anyway, I think I will probably never return to that group. It was important to me for a while and I fully respect what they are doing. Indeed, in my talks with two new therapists in the last week, I credited the group with some key insights. In fact, I mentioned that to the group as well yesterday. The idea that we have to reinvent ourselves after a death was one I got from them. I would even go so far as to say that’s a key concept behind this blog.

Speaking of therapy, I had my last session with Dr Perry and my first with J, the MFT, this week. Maybe my manic phase was due to my three therapy appointments hard upon one another. It nice to have someone listen to you! I’ll give J another session or two before deciding whether to continue. I didn’t get the instant comfort level that I did with Dr Perry but the circumstances are different now. She is young but treated me seriously. At one point she made reference to her own depression so there may be depths there that I haven’t seen yet.

(I’ve never been sure about the issue of identifying people in this blog. In general I’ve stayed away from last names in case somebody is looking through these posts for identification clues. I don’t ask anyone if they object to my writing about them. I guess if you do, you have to tell me. I strive to be respectful but I will always be honest.) 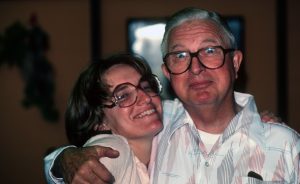