It’s an ordinary name, not unlike Chris Wood. Put it in a search window and you get a lot of hits. Too many. How do I find the Bruce Johnson who was my best friend in high school? I suppose I could try going through classmates.com or some such. I don’t think Bruce is – I hope he still ‘is’ – that kind of guy. I mean, the kind of guy who would register with his old high school alumni group.

I’m more mainstream than him and I haven’t registered with anyone. I did go to the 30th reunion of my graduating class. (This is quite a few years ago now.) Bruce wasn’t there, of course. There were a few people there who I remembered and wanted to talk to. An even smaller number remembered Bruce but no one knew how to get in touch with him.

We lived in the same neighborhood. Like a lot of us, he hung out at the park across the street from my house. I imagine that’s where I met him. We didn’t share any classes at school. He was most definitely not taking the college prep curriculum. On the contrary, Bruce was sort of defiant about the arc of his life. And, in a way, that was what interested me. He had no interest in becoming highly educated although he was plenty smart. He turned me on to Frank Zappa and the Mothers of Invention. He had a copy of their first album, which had a list of names of people that had influenced Frank. We pored over those names and tried to figure out who they were. About half we had no idea.

I still have the album. I don’t remember how it ended up with me. On it, I can still see the little ink dots Bruce put beside the names that he recognized. We pooled our meager knowledge but for the most part we were equally ignorant of the people Frank Zappa thought were important.

Frank was famously anti-school (‘Brown shoes / don’t make it! / Quit school / Don’t fake it!’) but not anti-education. While I was dutifully following the math and science path set out for me, Bruce was looking to further his education on his own terms. To that end, we went in together on a subscription to Rolling Stone magazine. We each paid half and the deal was that I got to keep the four books that were premiums and he got to keep the back issues. We both read everything. I remember the first issue we got had an advertisement for something called an Aquarian Music Faire in Woodstock, New York, with a lineup of bands that was staggering. We would have gone in a heartbeat if it wasn’t 3000 miles away!

Bruce had a knack for coming up with albums by bands I had never heard of who were really good.

I had a morning paper route and he had an afternoon one so every afternoon after school, I would go over to his house and sit with him while he folded his papers in his front yard. I don’t remember going around on his route with him but I may have. We rode bikes everywhere. The neighborhood was compact so it was no burden on me. I don’t remember ever having trouble doing homework and it certainly wasn’t anything Bruce was ever worried about.

He hung with a different crowd at school, of course, and brought back things that I never would have thought about. One time I remember him telling me that a girl he knew in our class was glad because her period came. It had never crossed my mind that people I knew in high school were having sex.

Bruce never got very good at the guitar. He played the harp (harmonica) pretty well. He sold me his Gibson Melody Maker which I played for a year or so until I started playing jazz at college. 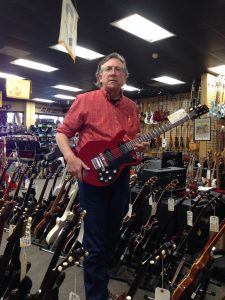 This isn’t exactly the same kind of guitar but close. The picture is me at Norman’s Rare Guitars in LA in 2018.

Speaking of college, after we graduated, I went away to college but not far enough. I stayed in the band I already had and came home frequently to practice and play gigs. It certainly contributed to my quitting school after only six months. I also had the luxury of a high draft number which Bruce did not. He would have been drafted and sent to Vietnam except he took the option of enlisting. The deal was that if you enlisted, you got to have some say in where you went. And it was for three years instead of two.

It sounded like a million years to me and it probably did for Bruce as well but he took it and went to Germany in the Army. We exchanged a few letters but our relationship petered out.

A few years later I heard he was back in the area living with a girl named Gloria but we never got together again. There were no email addresses or cell phone numbers to go to. His parents had moved or perhaps I didn’t want to go through them. I don’t remember.

I like to think it was Bruce’s influence that I strayed from the straight and narrow science education path into music and theatre.

Thanks, Bruce! I hope you still have all those Rolling Stones.

(I went and dug out the album. There are a lot fewer dots than I remember. And interesting for who we didn’t know! Also note Frank’s comment for the first tune.) 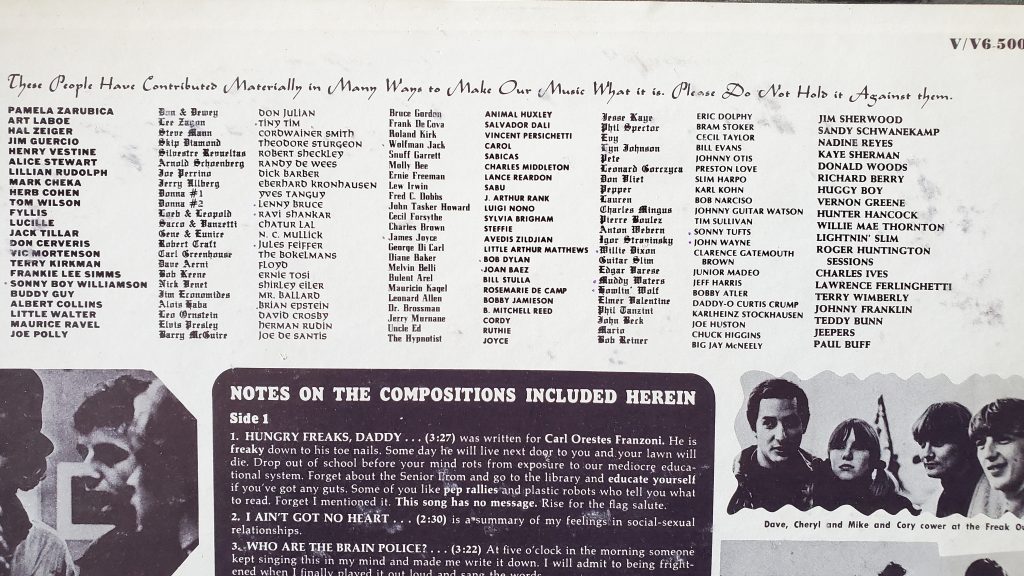