I went to the San Mateo County Fair this morning. Rose wanted to go because she had entered her oatmeal cookies and wanted to see how they were judged.

The fair opened at 10, but Rose likes to be early so we were there a little after 9:30. Free admission for the first hour! Quite a few people had the same idea, so there was a clot of a couple of hundred people at the gate. Many had young children. One little girl next to us was posturing dance moves and looking at the results in her shadow. The weather was perfect.

It struck me that this crowd represented the best of America. It had people of many cultures and ethnicities. And there were children of couples that were clearly from different ethnicities. The little girl we had been watching was joined by a friend whose skin was a different color. They were still obviously best of buds. Everyone in the crowd was respectful of each other.

About the time we walked up, someone started talking from a stage nearer to the gate. It was a county supervisor, who introduced the sheriff, who brought out the color guard and led everyone in the Pledge Of Allegiance. Our local State Senate representative was next as he spoke on ‘Emergency Preparedness Day’ which was the theme of the day. It was all over in about ten minutes and the gate soon opened and we all poured in. Free admission for the first hour!

In the exhibition hall were many of the typical fair booths: various county services, things for sale. We stopped at a booth for a farm to table venture run by local farmers. Rose signed up for a trial. The young man who talked to us said he was going to have a hard time all day ignoring the smell of the cinnamon roll booth about 20 feet away.

Just past the cinnamon rolls were the food entries: beautifully decorated cakes, breads, brownies, beers and wines, … and cookies! They were all mixed up in glass cases so we had to go around to all of them. Finally there was one oatmeal cookie that had won first place. I was disappointed, but Rose kept looking and nearby were her cookies.

‘2nd place!!’ She nearly screamed. She was so happy. It was at the bottom of one of the cases so she had to squat down to take a picture. The card had gotten bent wrong so her name was barely visible but she was delighted. ‘2nd place!’ she kept saying, over and over. She spent the next ten minutes texting and emailing the picture to everyone she could think of. She was pumped! 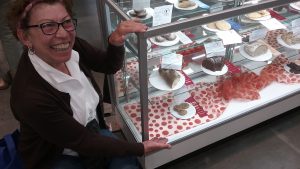 After a bit, we went outside and looked at the midway and had a corn dog and crappy ‘lemonade’. A band started playing at a stage nearby and we smiled at another little girl who was moving to the music. Then she wanted to go in and look at the cookies again. I swear, she was floating!

On the other side of the food entries was the fine arts pavilion. We went over and looked at the paintings, drawings, photographs, poems, quilts until we were tired. ‘2nd place!’ she kept saying. What a great morning we had.