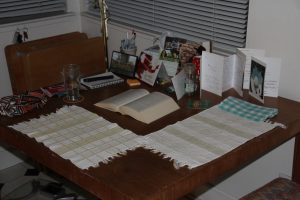 I called Cubby today & talked to him on the phone. I’ve been trying to work up the courage to do that ever since his wife died on Easter Sunday morning. I sent him a text that morning but every time since when I thought I had a few minutes to call him I found a way to not do it.

I called him earlier in the year when Ronata took a turn for the worse. I had to leave a message and I almost couldn’t get any coherent words out. He’d been struggling with her being seriously ill since her stroke in 2010 & the thought of another death close to me knotted me up completely.

Cubby told me he had to quit his job at the union because he was basically going crazy. He had thought it would be better for him to go back to work but it wasn’t. Now he’s on partial disability while he tries to make sense of his life. He’s in therapy as I am. I told him about the Bereavement Support Group that Kaiser sponsors that has been very helpful to me. He said he would check out their East Bay schedule.

For those who don’t know, the night Zach was killed I was mixing audio for a show at the Herbst and had turned my phone off. Jeremy was frantically trying to reach me and all he could think of was that he had Cubby’s phone number from 3 1/2 years ago when he came out to work out of the hall for a couple of weeks during the busy season. Cubby called Stacey, who was stage managing that night & got her to have me turn my phone on. Cubby told me to call Jeremy immediately. I knew it was bad but I thought something had happened to Rosalie. Never in a million years would I have guessed what actually did happen.

After I talked to Jeremy and started putting the show stuff in order so I could leave – in a daze, thank you Stacey & Smitty –  I talked to Cubby again about some other jobs I had scheduled for the next two days.. He told me very forcefully that I needed to get with my family and not worry – indeed, not to even think about – any work issues. He said over and over, ‘Whatever you need, I’ll be there for you.’ And I knew he wasn’t bullshitting because he doesn’t bullshit. He stuck with me on the phone as I was driving to Teresa’s.

So we’re talking today about grief and how it manifests – mostly crying jags. I told him I had been pretty good for several weeks but yesterday out of nowhere I started sobbing and couldn’t stop for about ten minutes. He said yeah that’s weird, the same thing happened to him about the same time.

There’s a lot more to the story of that awful night but for now all I want to do is say I talked to Cubby today & I didn’t start bawling. I guess that’s good.