I see it’s been 8 days since my last flurry of posts following the death of my friend Robin. I haven’t been super busy, but I had the grind of showing up for work every day at Davies. On only one did I have to stay past 5 pm. I tried for two nights to go without sleeping pills and the results were not very good. The first night I did ok but the second night I woke up at 3 in the morning and was not able to go back to sleep. That put a bad spin on the rest of the day, as you might imagine. I started feeling like a cornered animal, desperate to escape but not knowing how to do it.

Today Sarah’s quartet is playing a very ambitious program over in the East Bay. One of the pieces, Steve Reich’s Different Trains, requires the use of amplification of the instruments along with the playback of a pre-recorded track of train sounds and speaking. I was able to arrange for the use of some of the Symphonyu’s sound equipment so in a couple of hours I’ll be going back to the hall to gather all that together and take to the concert.

The weather was hot earlier in the week but today the fog is in over Linda Mar. Windows that were thrown wide open just a couple of days ago are shut again.

I finished my jigsaw puzzle this morning. It was only 750 pieces and not too difficult. It took just under two weeks and that included not even touching it at all for several days. With no band music to prepare, I am hardly playing music at all. I might have picked up the guitar for a total of ten minutes in the last ten days.

Last Saturday was a nice day. My nephew Danny hosted a get together with just about all the Northern California Woods. The best part was seeing, and playing with, all the young kids – great nieces and nephews to me. In all, there were 5 under the age of 6 years. Here they all are with Mom and Dad. 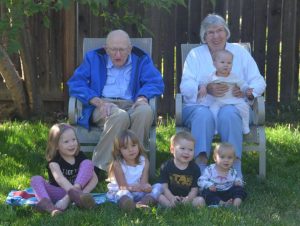 My nephew Danny is planning a family get together this weekend at his house in Lincoln. Us Bay Area folks are planning on going but there are questions about who is staying overnight, how we can car pool, etc. Mom sent me an email yesterday with a bunch of things on it so rather than responding in kind, I called her. They didn’t answer, so I left a message.

I got no response until I checked my email this morning. She said she tried to call but my email was full. Full? What have I got stored . . .? Oh.

So, here’s my story. I save certain voice mails from my kids. The ones that seem indicative of milestones. I usually transfer them to my hard drive and take them off my phone to avoid just the problem that I now have but the last one I got from Zach and the anguished calls from Jeremy and Mom that awful night are still there. I just checked and I did transfer them but I didn’t erase them from my phone. There are a few other, more recent ones, saved.

It’s funny, I only had to hear the first couple of seconds of each one of those to bring it all back this morning. I didn’t get much work done for a while after that. Luckily, the theatre was dark and hardly anyone was around.

For months I was sure I had a early November voice mail message from Zach talking about his upcoming trip to California with Emily. When I finally went through them carefully, it wasn’t there. I guess I erased it by mistake somewhere along the line. Here’s the last one I have, from the summer before.