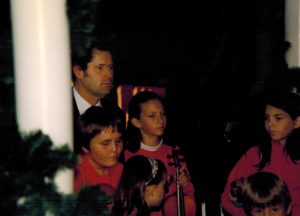 I had an idea earlier today for a post and time this afternoon to write it, but meanwhile the news came of my cousin Patty’s death. I call her Patty but for most people she’s been Patricia for many years now. I can’ t help it. We were closest when we were kids and she was still called Patty by everyone. By the time she was an adult named Patricia we didn’t see each other very often.

She wasn’t much for traveling. She came out to California once that I can remember. I went through Denver every few years but never as a destination. Unlike many of us, she never lost her staunch Catholic faith. She was active in her church and in her retirement I believe she attended Mass daily.

Still, after many years of declining health, when the news came last week that she would not live much longer, we also were told that she feared death.

I talked to Mom about it last night. (Mom is my chief conduit to the Denver relatives.) I saw parallels between Dad’s final days and Patty’s. Patty was 20 years younger but the long decline was similar as were the mixed feelings I had when death was clearly imminent. Do we wish for a return to health? Of course, but often, as in these cases, we know it’s not going to happen. Mom was pretty tough about it. She said the best thing was for Patty to die. Her ‘life’ was just pain and agony now.

There had been some discussion a few weeks ago of her going back to Patty’s funeral. We don’t know when that will be but Mom already decided she will not be going. She had already made plans to go to Denver in June to put Dad’s ashes in the ground there. She will pay respects at Patty’s grave then.

I believe Patty is in heaven. She led a good life.

It’s been ten days since Dad died. Many people have expressed their condolences to me. No doubt many more have done so to Mom and my siblings.

Yet we’re all pretty dry eyed and matter of fact about it – at least in my company. We Wood’s are famously even tempered but this is our father, for god’s sake!

So I’ve been thinking about why. ‘He had a good life.’ ‘He was ready.’ ‘He had been in a long decline and wasn’t really who he had been for a long time.’

That last is kind of my best answer. He really died a long time ago. The weird part is that it wasn’t a clearly defined event like last week. The breathing stops, the heart stops – he’s dead.

But that begs the question of who ‘he’ is. Preparing for the funeral, Tom created a slideshow for people to watch. We started with 20 or 30 pictures but it quickly grew to nearly 100. That was Tuesday. As of yesterday, it was up to nearer 150. We’ll probably keep working on it right up to when we have to leave for the church Monday.

What was interesting to me was that the exercise brought back into my mind the man who raised me – without doubt the most influential man in my life. Over the last four years that man has slowly slipped away.

I can’t help but contrast Dad’s death with the death of Zach. Two people who were as close to me as anyone could be and yet my reactions couldn’t have been more different. The circumstances were vastly different, of course, so that must be why.

The time that has passed since Zach’s death has muted my feelings. Life goes on. I still get angry about the actions of the two drivers and will approach the DA once more about reopening the case. But the overwhelming sadness that I felt for months afterwards hasn’t shown up for Dad.

The funeral is Monday. We’ll see how that goes.

Dad died yesterday morning. He hadn’t eaten nor taken water for several days so it was not unexpected. At some level, we are all relieved. The phrase I used on FaceBook was ‘His torment is over.’

‘Torment’ might be a bit overstated. He never complained of pain, although in truth his ability to communicate was pretty much entirely gone. He would sometimes react to our attempts to move him by making a grunt of pain. Towards the end of last week he was not sleeping well and twitching a lot.

‘Torment’ could also be applied to Mom’s experience. It was bad enough to be losing her husband of nearly 66 years but her home was being invaded by not only her children but her children’s spouses, hospice nurses and technicians and other helpers and visitors. She will have to endure that for a while longer – ten of us were there yesterday – but hopefully she will be able to sleep better. We’re back to the dilemma we had with Dad: how do we respect their independence yet give them help when needed? This is especially difficult when they say they don’t want the help.

So, we muddle through as always. We do it for love, which helps.

Mom called me at about 5 with the news. The phone ringing woke me from a deep sleep and my original reaction was irritation. I had been getting a lot of sales calls lately so that was my first thought. When I saw ‘Mom’ on the phone, though, I knew what it was about.

We got down to Santa Clara about 7. Tom and Mary Lou had been staying over so they had been with Mom. The hospice nurse had come over right away and done some minimal clean up. He was lying in the bed as he had been but he was still. His mouth had a slight smile, we all thought.

Teresa and Jane got there a little later. Teresa wanted to clean him more thoroughly so she did that. Mom and Dad had made arrangements long ago with Trident for cremation and they were coming at ten so we all took some time before that for reflection and community.

The Trident people were respectful but professional. They were in and out of the house in less than ten minutes. We were left with memories only.

So the rest of the day was about memories. Mary got there about 1. Julian and Lisa came. Sarah came. We all sat around and ate and reminisced. We talked about funeral arrangements and other quotidian things. There were some tears but a lot of laughter.

I’ve had this title in my mind for a couple of weeks now. Like many other things, I’ve seen it before but now I am experiencing it. It’s strange that after a lifetime of trying to preserve health – holding death at bay, as it were – we are allowing death to have its way. It’s also strange that I am personifying death. That’s what humans do, though, to try to understand what is fundamentally not understandable.

Well, anyway, death came to Dad yesterday morning. I’m going to try make a separate post about that. This is a snippet I wrote on my phone Sunday that speaks to the watch part.

It’s Sunday January 20th and the family is gathering at Mom and Dad’s to celebrate Sarah and Jack’s birthdays. Dad is at the end, though. He hasn’t had any food for several days and very little water. Teresa and Mom gave him a small dose of morphine this morning. Previously the heaviest pain medication was Tylenol. He had been very restless the 24 hours previously. He was sleeping soundly when Sepi and I got here about 12:30. He woke up a little about 1. He seemed to recognize Mary and tried to respond to her. Now (2 pm) he’s sleeping again but his breathing is labored. He sort of half clears his throat every minute or so. Mom was sitting with him but I relieved her so she could eat lunch. Mom went to the church yesterday to make arrangements for the funeral Mass and reception. She is definitely ready for this to be over.