Laundry day today. Every time I fold my T-shirts I think about when and where they came from. At this point about half of my non-V-neck T-shirts are still from my days as a stagehand at Arco Arena in Sacramento. There it was common for a show to hand out T-shirts to the crew at the end of the load out. Occasionally they would be used to establish crews, with different colors indicating whether you were, for example, in sound, or carps, or backline, or lighting. More often they were all the same.

I worked the shows on truss spot, which is sitting in a seat about 30′ in the air and aiming a small spot light at various people. I say people even though the stars of the show were these huge mechanized dinosaurs that slid across a special floor and acted out a story narrated by a guy walking amongst them. As the show ran several days I brought a small camera up to my perch on the third or fourth day and snapped some pictures when my light wasn’t being used. They’re not very good. This one is the best at conveying the size of the dinosaurs. You can see the Arco audience in the background. The shadows in the foreground are one of the speaker stacks and the frame holding my light. 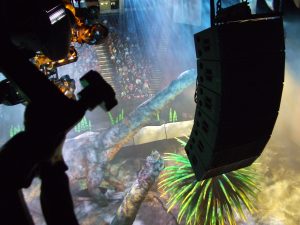 But back to the T-shirts. For the load in and load out of this show, I was assigned a fork lift. I spent a whole day driving around to large trucks and lifting pieces of these dinosaurs off and taking them into the building. Fork lifts were a common accessory for the shows that came to Arco but it was rare that I got to operate one. I never considered myself an expert but I did ok. I ran a fork lift perhaps a half a dozen times at Arco. This show taxed my skills to the limit because the dinosaurs were not only heavy but bulky. It was important to maintain a low center of gravity while moving them. Some were unloaded in the parking lot and driven inside up and down ramps.

So, my T-shirt was the same color everyone else got but mine said ‘Fork Lift’ on it. I think there were probably three of us on that show so that was a pretty exclusive group.

The show was in 2008 and the T-shirt is showing signs of age. I’ll probably put it in the Goodwill pile before it’s completely trashed. Somebody might like it.