I don’t know who first started calling Zach by the nickname ‘Z’ – it was probably a Ewing, as they are much better at nicknames than the Woods – but it became one I really liked. As Zach moved through middle school & into high school, none of his friends used it while the family, especially his mother and me, used it often, usually in an affectionate way. It was our family nickname for him & no one else used it.

I believe it was at Thanksgiving in Santa Clara, where the Woods traditionally gathered, in the days after Zach’s death that my sister Mary showed up with a ‘Z’ that looked like one of those European country designators: a letter or letters, black on white, within an oval stuck to the back of your car. Mary had gotten a few of these Z’s printed on magnetic paper and she suggested that we put them on our cars to remember Zach. 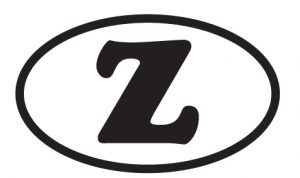 I thought it was a great idea and put one on my car immediately. Unfortunately, the magnetism on the paper was not enough to withstand the rigors of modern driving and the Z soon fell off. I scoured the local craft shops for better magnetic paper without success. Mary’s original Z’s were rather large, as befits a sign on a car. Once I realized that smaller ones could be just as effective with easily obtainable magnetic paper, I took to my trusty InDesign to make more of them. I made two sizes and put them in the thank you notes I wrote and gave to friends, suggesting that they put them on their refrigerators, or other metal surfaces in their homes to commemorate Zach. I’ve put several in inconspicuous spots backstage at Davies Hall & they never fail to give my heart a little flutter when I see them.

Eagle-eyed readers of this blog will notice that the header of this page features a ‘Z’.

Here are links to the two sizes if anyone cares to make their own: