<Edited Nov 7 to add pictures.> The end of day two of my trip to Washington. It’s been pretty eventful so far. Yesterday when I got to the luggage carrel at Sea-Tac and looked out the window, I saw fat flakes of snow gently falling down. Going through the door to the outside was a shock to this Bay Area boy. Cold, cold, cold!

But Ashley was right there within a couple of minutes and the car was nice and warm. I was in such a hurry to get in the car that I didn’t think of sitting in my usual spot next to Rosalie in the back. That meant I couldn’t really see her unless I twisted myself completely around. That’s not practical at my advanced age but we talked and had fun grabbing shoes. I commented that she can really reach the seat in front much more easily than before. She’s very tall for an almost 5 year old. Ashley said there were two things on Rosalie’s agenda for Grandpa: puzzles, and tickling. We can do that!

After lunch, we did puzzles for a while at first but tickling did ensue eventually. 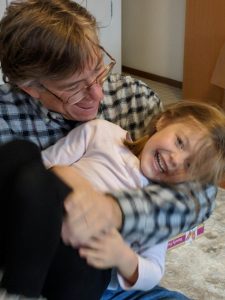 About 5, we headed out for Jeremy’s Fire Academy graduation. It was held in a hotel in Issaquah. There were all the usual graduation accoutrements: bagpipers, a color guard, a chaplain and lengthy speeches. Various awards were given to high achievers. Each graduate had a family member come up to pin the badge on him or her. (There were two woman graduates out of 21 total.)

When Jeremy’s name was called, Ashley went up with Rosalie. Jeremy, who had been stern all evening, picked up Rosalie with a huge smile on his face and held her while Ashley pinned him. Then they all turned to the audience and got their picture taken. Rosalie was somewhat distracted in Daddy’s arms but the instant she realized her picture was being taken, she turned on a huge smile. That generated a laugh from the audience.

After the pinning was complete, three of the graduates made presentations. One was Jeremy, who spoke of his time in the Atlanta Fire Department and the illness of Atlanta firefighter Frank Martinez. Frank reached out to Jeremy in November 2015 when Jeremy needed people to cover shifts while he was with us all in Louisiana. Frank was very sick at that time and couldn’t do the work, but did it in a gesture of solidarity. Jeremy drew the comparison with that solidarity and the group he was graduating into. He also commented that Frank almost certainly got cancer from poisonous substance exposure on the job and his goal was to reduce those exposures among firefighters.

Rosalie was sitting in my lap at that point and tears rolled down my face during his talk. I wanted to just hug Rosalie instead of wiping my face.

Afterwards, many more pictures were taken and we met some of Jeremy’s academy colleagues before heading out for a late dinner.

Today was very quiet. It was chilly and foggy early in the morning but by around 10 it was lifting and by lunchtime the sun was shining. These are out the back door window: 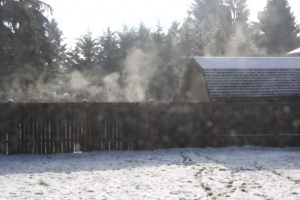 Jeremy slept in and Rosalie and I played with dolls, did puzzles, colored in her coloring book, read books . . . and tickled. After lunch, we went for a bike ride around the neighborhood. The temperature was around 45 but no wind. It was very pleasant in the sunshine. Several houses had the remains of snowmen still extant. 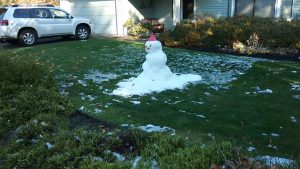 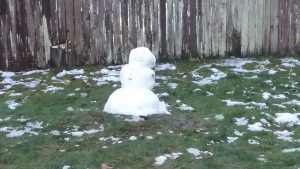 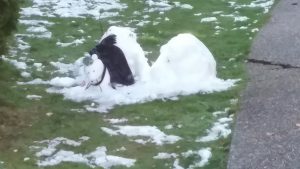 Rosalie experimented with the icy remains of the snow in the puddle in front of the house. Later we went to a local park where we walked across the Tolt River on a footbridge, admired the Cascades lit up by the setting sun, and played in the play area. Rosalie made ice cream from the bits of grass and wood chips there. 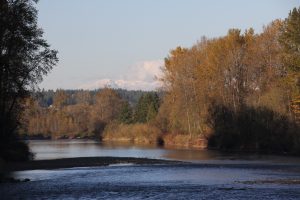 Tonight we all had dinner together and made our plans for the next three days. Ashley had a new living room light delivered today and it had a fantastic box for imaginative girls. Who could that be? 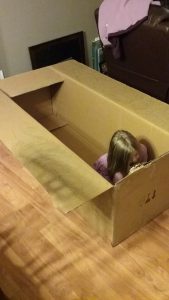