I think it was about three weeks ago when I was awake in the early hours and witnessed a lightning storm unlike anything I have ever seen outside of the Midwest. At the time, I thought it was really cool: huge forked lightning bolts I could see stretching from the clouds to the ground, bright flashes and huge booms of thunder. the only thing missing was the torrential rain.

There was rain, but only a little, and I should have known that the lightning would be a big problem for the forests in the state. Within a couple of days, news reports started coming in about fires around the Bay Area: one in Napa, one in Santa Cruz County and another in south Santa Clara Valley. They were all given names related to the lightning, and called ‘complexes’ because they were many smaller fires all started by the lightning.

Soon, it was 2018 all over again. San Francisco was covered in a thick cloud of smoke. Any outside projects that I had been considering went on the shelf. Going outside required an N95 mask and it still burned my eyes. I only went out briefly.

Last week it got a little better and I did some work trimming the tree in the front of the house. The summer pattern had resumed with cool ocean breezes and it wasn’t as smoky.

But over Labor Day weekend it got hot. Really hot. Saturday, Sunday and Monday we kept the shades and windows closed and wore as little clothing as we could. We couldn’t cool the house down at night so it stayed in the 80’s for three days. Outside . . .  take a look: 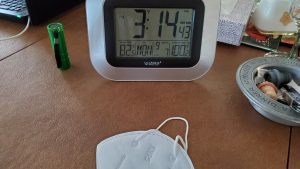 Besides being hot, the smoke had returned. 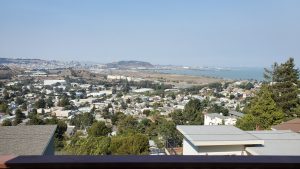 This is hard to see, but there is a gray cloud over downtown SF and Oakland. There was no wind.

Then later on Monday the sea breeze finally showed up. The smoke got pushed further into the East Bay and the temperatures fell by 20 degrees.

But something odd was happening. We awoke yesterday to what seemed to be a typical marine layer except the sun seen through the murk was red. As the day went on, the clouds never went away. In the afternoon I noticed that there was fog coming in over the Daly City hills but the sky above the fog was not gray so much as yellow. The temperatures were cool and the air did not smell smoky but something wasn’t right. It turns out that there is another fire started by lightning, in Mendocino, that is sending smoke to the Bay Area but the smoke is above the inversion layer.

Then, this morning, we are in some kind of science fiction movie.I took some pictures but they don’t convey how creepy it is. Everything outside is suffused in a dark red glow. Eating my breakfast at 8 o’clock, I had to turn the dining room lights on to see what I was doing. 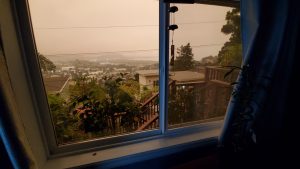 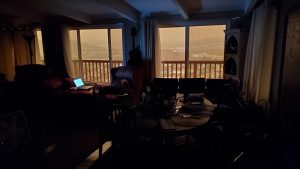 I went outside briefly and rinsed the soot off of the cars. It’s on everything but for now I only did the cars. No outside projects today . . .