Yesterday, after getting the news of Robin’s death, I did fairly normal things which you can read about in yesterday’s blog post. Even before getting the news, I had been determined to get out of the apartment and go for a walk somewhere, so I did that. Just south of Half Moon Bay is a parking lot for a trail that leads 1/2 mile straight through some fields to bluffs overlooking the ocean. On one end are stairs that go down to a beach; on the other a couple of benches where you can sit and look at another beach that is protected for the seals. 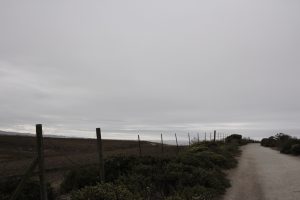 There were no seals, and very few people. In two hours there, I saw five people (and one dog, which wasn’t supposed to be there, but that’s another story).

On the way back, I walked down Main Street and looked in the cute little shops. There is a nice card store there where I bought some cards, including a sympathy one for Kris. I was going to have lunch there but the cuteness of the street was bugging me. For that, I went back north of town to the Cafe 3-0 at the airport. Just your basic, no bullshit, greasy spoon.

I got home about 1 and was pretty pooped so I laid down and picked up a book I had gotten at the library last week. I’m not sure why I got it because I didn’t recognize the name of the actor who wrote it, even though he was evidently successful. He had grown up in San Francisco. I think that’s why I picked it up.

I never did sleep. I read that book from cover to cover. It’s called Are You Anybody? by Jeffery Tambor. When I was done, I just started sobbing. For Robin, for Zach, I don’t know, but it hit me somewhere deep.

I got involved in the theatre at DeAnza College when I was 18. I don’t know why I insist on spelling it that way. The spell checker says it’s wrong. I think I do it to differentiate between live theatre and the movie theater. Live theatre is just the best. Sort of like live music. It’s an activity that a group of humans take on for the purpose of presenting something to other humans in a communal setting. I’m sure there were aspects of theatre in caves thousands of years ago. I think it’s one of the most beautiful things that a human can do.

Anyway, I was at DeAnza, my local community college, because I had quit being a math major at UC Santa Cruz in favor of playing in my rock band in Cupertino. After six months of flailing around, my parents said that if I wanted to live at home I had to go to school. So, I went to DeAnza as a music major.

Literally my first quarter there I was just looking for a class to fill out my schedule and my eye fell on Stagecraft. I thought, ‘I’m going to be on stages for the rest of my life, I’ll take a class in stagecraft.’ I had never been particularly interested in theatre. I don’t think I’d ever even been to a play. I had no idea what stagecraft really meant.

The purpose of the class was basically to build sets and run the technical end of the play which the department was doing. My first theatre job was taking care of props for the play that fall. It was called Marathon 33, about marathon dancing during the 1930s depression.

Theatre at DeAnza was done in a facility then called the Box Theatre. It was a room roughly 60′ square which included the shop area. The was a grid for hanging lighting instruments over most of it at 16′ high and a lighting and sound booth overlooking the whole thing. Seating risers got pushed around to suit the configurations of what ever performance was being done.

Abutting the Box Theatre, touching but not really connected, was a 2,500 seat auditorium called The Flint Center for the Performing Arts. Actually, the Calvin C. Flint Center, named after the man who who had been the first Superintendent of the school district. After being in the school theatre for a while, I got to know the people running it and discovered they had student help for setting up community shows. Pushing the shell towers around and setting up risers and chairs, mostly. Incredibly (in my mind), rather than look to the drama department for workers, they had felt that strength was more important so they had football players working there. Oh, and the football players’ girlfriends . . .

Long story short, I eventually got on their list and joined the crew doing risers and chairs. That eventually led to a staff position and, later, getting overhire jobs with the union for the professional shows and, still later, joining the union and making theatre my career.

In all this time, I’ve done relatively little in what I would call real theatre. Plays. I worked at SF Opera for 13 years. I worked on lots of traveling musicals in Sacramento for ten years. The last five or six years I’ve been working pretty steadily for the SF Symphony. All worthy communal human activities. Just not really theatre.

In the relatively few times I’ve gotten involved in actual plays, it always felt like home. There is a certain kind of bonding that takes place with theatre people that I really enjoy.

Robin and Kris are theatre people to the bone. And Jeffery Tambor’s book is about theatre people. And maybe I have some regrets that I took the jobs that paid better and didn’t get so much of real theatre. And I thought of Robin being dead and how vibrant she had been, and how dedicated she was to real theatre, and how she was gone too soon, and Zach was gone too soon. So I was crying.

I eventually calmed down enough to go over and sit with Rose for a few minutes. She doesn’t get the theatre stuff but she gets everything else better than anyone. She had a lumpectomy and radiation treatment three years ago. We cried a little together, then I came home and ate some dinner and went to bed. I was beat but I ended up laying there reading posts on the guitar and bass forums until midnight.

Susie texted me last night that Kris is in assisted living because the left side of her body doesn’t work any more. Susie is another real theatre person. Today I hope to be making a call to Susie and perhaps to Kris. I couldn’t face it last night.