The Symphony played Prokofiev’s Romeo and Juliet tonight. They didn’t play the whole thing – it was the second half of the program – but they played 45 minutes of it. I had forgotten how much I liked that piece. It took me back to my days of working American Ballet Theater (ABT) at the Opera House. They would come in every February for two weeks. It was promoted by the Opera so the Opera department heads would get the call to do the shows. That wasn’t a sure thing for me back in those days so it they were very welcome when they came.

MTT didn’t really do it like a ballet. His tempos were all over the place, but in a good way. It sounded very romantic to me tonight. Of course I’m just listening over a speaker in the lighting control room so it’s not close to the real experience. I suppose I should go out in the hall tomorrow and listen.

And Sarah is in the band! It never fails to give me enormous pride at seeing her up there.

I did have a rather strange trip down memory lane tonight, though. I saw that one of the sections being played was the death of Tybalt. It took me back to the night our cat, Tybalt, died. I was alone in the Suisun house. Nancy had moved out several months before. Tybalt had been very ill for some weeks and we all knew that the end was near. One day I went to work in the morning and didn’t come home until pretty late, 11 or so . He was right where I had left him, in the living room, cold.

All the emotions of the previous months came washing over me and I remember sitting by myself for at least an hour at the dining room table sobbing and telling Tybalt’s body ‘I’m sorry. I’m so sorry.’ over and over. But I texted the kids and Sarah responded. We had a kind of conversation in the midst of my tears. She comforted me.

And I knew I had saved the text so I looked in my (new) phone for a text that was 6 1/2 years ago. It wasn’t there, but upon scrolling back to look I did happen to see this picture of Jeremy, Sarah and Zach taken at the wedding of their cousin Sean in August 2015. They all look so happy and healthy . . . 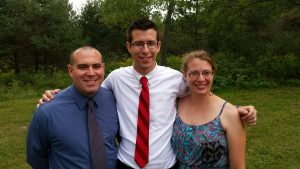