It’s official. Sepi and I will be moving into her house in Brisbane in September. Despite my efforts to not accumulate ‘stuff’ there is a lot of ‘stuff’ in this apartment that I do not need.

I have three boxes of Zach’s ‘stuff’ that I have already decided I can let go of. He had looked at it all in 2014 and said he didn’t want any of it. I couldn’t bring myself to throw it away then and I hadn’t even thought about it at all until very recently. I’ve reached out to his siblings and to Ally but there is no interest. It’s possible his mother may want them. That inquiry is pending.

I sent out a message this morning to relatives about my furniture that I will not be needing in a couple of months. Perhaps in the coming weeks I will host visits where they can look through my things for ‘stuff’ they want. Meanwhile I will be accumulating boxes to put things in.

From 2004 to 2010 I moved three times. It doesn’t sound like much but I had been in the Grass Valley house with a family for ten years. There was a lot of ‘stuff’! Also, there was a lot of shuffling of ‘stuff’ back and forth between two houses for a while culminating in the foreclosures. Some things I thought had value I just left in the house for the new owners. I had no room for them where I was going.

I learned that I didn’t need most of that ‘stuff’ in my little apartment. There is a hardware store down the street that sells screws and things by the piece. I don’t try to work on my own car any more. Pacifica has a library.

Sepi’s house is comparatively big but we are both committed to downsizing in the long run. Ultimately our expectations are that we will move to a condo with a pool and an exercise room with shops nearby. Then we will have to downsize still more. 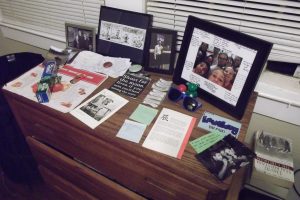 This image came up in my screensaver rotation a moment ago. It is what Zach’s room looked like when we got there the day after he died. I had just a few minutes ago cleaned the same dresser top where I now keep some of Zach’s things in my bedroom. I have the dresser now but nothing else in this photo. I’m actually amazed that I can look at it – and I did look at it carefully – without bursting into tears. For a long time I couldn’t leave my apartment without thinking about what people would think about me and my living space if I never came back. Sometimes I would tidy things up just a little extra. 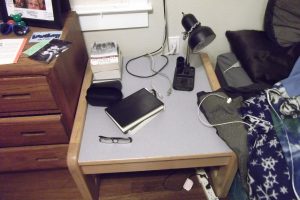 If it weren’t for Zach’s death, no one would have taken pictures like this. I don’t have any pictures of my apartment like this. 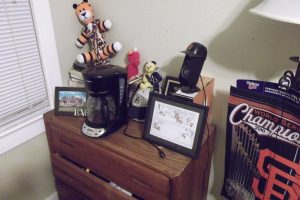