It’s really a drag that this is more on my mind than my visit with Jeremy’s family today. The Symphony hired me for the job of Stage Manager over an individual who was doing the job on an interim basis. He has been cooperative with me but another crew member seems to be quite resentful – he thinks the Symphony should have promoted from within – and has been less cooperative.

They are all off on their vacations now and meanwhile I am going to work every day, learning the computer systems, trying to plan for the Gala opening in a month and doing necessary maintenance. This is all important stuff, but now I am having to have meetings with management and HR about how to respond to this intransigence.

More importantly for me, I am losing sleep thinking about all this stupid stuff. This person doesn’t seem to understand or care that the Symphony is not going to change their minds and hire the other guy instead. The only thing he can hope for is that I will decide that I don’t need the headache and bail out. Indeed, I’ve talked to some other people who were asked to apply and did not because of this very reason. I was aware of the issues going in and I’m not going to bail but there is a cost and that makes me resentful. As a leader, I have to put that aside which I can do while at work. At night, the demons come, though.

Today and tomorrow, I am not working, but driving up to Grass Valley where Jeremy will be coming with his family to Tom’s house. Yay for a Rosalie day!

It’s been ten days since Dad died. Many people have expressed their condolences to me. No doubt many more have done so to Mom and my siblings.

Yet we’re all pretty dry eyed and matter of fact about it – at least in my company. We Wood’s are famously even tempered but this is our father, for god’s sake!

So I’ve been thinking about why. ‘He had a good life.’ ‘He was ready.’ ‘He had been in a long decline and wasn’t really who he had been for a long time.’

That last is kind of my best answer. He really died a long time ago. The weird part is that it wasn’t a clearly defined event like last week. The breathing stops, the heart stops – he’s dead.

But that begs the question of who ‘he’ is. Preparing for the funeral, Tom created a slideshow for people to watch. We started with 20 or 30 pictures but it quickly grew to nearly 100. That was Tuesday. As of yesterday, it was up to nearer 150. We’ll probably keep working on it right up to when we have to leave for the church Monday.

What was interesting to me was that the exercise brought back into my mind the man who raised me – without doubt the most influential man in my life. Over the last four years that man has slowly slipped away.

I can’t help but contrast Dad’s death with the death of Zach. Two people who were as close to me as anyone could be and yet my reactions couldn’t have been more different. The circumstances were vastly different, of course, so that must be why.

The time that has passed since Zach’s death has muted my feelings. Life goes on. I still get angry about the actions of the two drivers and will approach the DA once more about reopening the case. But the overwhelming sadness that I felt for months afterwards hasn’t shown up for Dad.

The funeral is Monday. We’ll see how that goes.

Dad died yesterday morning. He hadn’t eaten nor taken water for several days so it was not unexpected. At some level, we are all relieved. The phrase I used on FaceBook was ‘His torment is over.’

‘Torment’ might be a bit overstated. He never complained of pain, although in truth his ability to communicate was pretty much entirely gone. He would sometimes react to our attempts to move him by making a grunt of pain. Towards the end of last week he was not sleeping well and twitching a lot.

‘Torment’ could also be applied to Mom’s experience. It was bad enough to be losing her husband of nearly 66 years but her home was being invaded by not only her children but her children’s spouses, hospice nurses and technicians and other helpers and visitors. She will have to endure that for a while longer – ten of us were there yesterday – but hopefully she will be able to sleep better. We’re back to the dilemma we had with Dad: how do we respect their independence yet give them help when needed? This is especially difficult when they say they don’t want the help.

So, we muddle through as always. We do it for love, which helps.

Mom called me at about 5 with the news. The phone ringing woke me from a deep sleep and my original reaction was irritation. I had been getting a lot of sales calls lately so that was my first thought. When I saw ‘Mom’ on the phone, though, I knew what it was about.

We got down to Santa Clara about 7. Tom and Mary Lou had been staying over so they had been with Mom. The hospice nurse had come over right away and done some minimal clean up. He was lying in the bed as he had been but he was still. His mouth had a slight smile, we all thought.

Teresa and Jane got there a little later. Teresa wanted to clean him more thoroughly so she did that. Mom and Dad had made arrangements long ago with Trident for cremation and they were coming at ten so we all took some time before that for reflection and community.

The Trident people were respectful but professional. They were in and out of the house in less than ten minutes. We were left with memories only.

So the rest of the day was about memories. Mary got there about 1. Julian and Lisa came. Sarah came. We all sat around and ate and reminisced. We talked about funeral arrangements and other quotidian things. There were some tears but a lot of laughter.

It’s interesting to read the generally upbeat tone of the last post from the perspective of a few days later. I had left the larger group to their activities and went off by myself, first (after breakfast) heading over to Zephyr Point where Nancy had had the bench installed. I suppose I was technically trespassing as I was not a guest there. No one challenged me and I did not stay long. I was well familiar with the conference center layout and went right to it.

It’s a lovely spot and a lovely bench. The day was the best that Tahoe could offer: 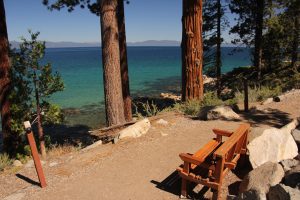 I drove on up the east side to Incline Village, got some lunch and headed down the hill to the Kents in Grass Valley, where I spent a good couple of hours just talking. Then to my brother Tom’s, where the foothill Woods were gathering.

That was very nice. I especially enjoyed watching the cousins play together. We stayed the night at Tom’s and got up early the next day to have breakfast with our former neighbor Patsy. Originally I wasn’t going to go since Nancy was going to be there and I didn’t want to harsh anyone’s buzz. The children prevailed upon me and in the end it was fine. We were both on our best behavior. After breakfast, Emily & Linda loaded their stuff in my car and I took them back to SF to fly home.

All that went well. I felt pretty normal most of the time; no big weepies or anything. I knew I was going to need a nap when I got home. Both nights away had been really short. So the three hour nap Sunday afternoon didn’t surprise me but going to bed again at 8:30 and sleeping to 6 am did. Then Monday morning after I did laundry, I was really tired again and had to lay down some more. I had driven 625 miles by myself from Friday at noon to Sunday at noon with a total of 8 hours sleep.

Jeremy was coming back from Grass Valley and Teresa had a big dinner planned but I was logy the whole afternoon. Finally after they called to say they were there at Teresa’s, I walked over without enthusiasm.

Before I even got in the front door, I was hit with a 3 1/2 year old lightning bolt named Rosalie who doesn’t do sadness. So that was good. We had a wonderful evening. Rosalie wanted to go to the beach and Ashley wanted to go to the pier to look for whales again. Luckily, there is beach near the pier. The whales were still putting on a show and Rosalie played in the sand and watched the birds and fisherfolk. Then we came back and ate and visited some more.

The next morning we saw the Georgia folks off to the airport from Teresa’s. Jane took them in her van. We got one last photo then I headed home for more laundry and cleaning up. Nancy had wanted the oak box that held Zach’s ashes for these last few months so it was gone. 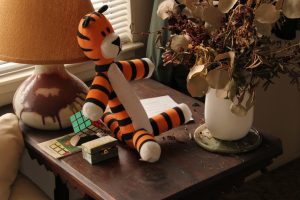 I put Hobbes in my bedroom next to Poochie and took the dead flowers out to Rose’s little Zach garden and laid them there. 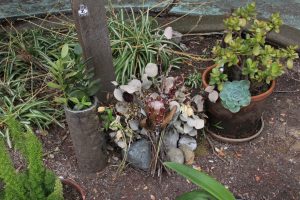 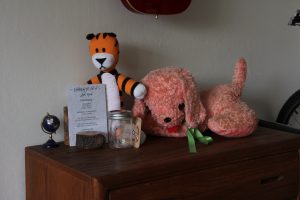 I don’t feel sadness so much as I’m just really tired. I’m going back to work today so we’ll see how that goes. I had agreed to work on Friday which would have made four straight long days working. The thought of that was making me weak so I bailed out of that one. Hopefully I can keep it together for today and tomorrow and recover on Friday.