We’ve gotten a lot of gifts for our wedding but today I want to talk about some gifts we gave to others. Specifically, a gift we gave to our officiant, Willie Brown.

Willie, of course, is the classic man who has everything. Sepi and I had coffee on Sunday with another politician who knows Willie. We asked what she thought. She was a stumped as we were. ‘A tie?’, was all she could come up with.

We went to Macys, then Nordstrom, looking for ties without success. Even the nicer ones were made in China and I wasn’t going to give Mayor Willie Brown a tie made overseas. Sepi texted back to her friend our dilemma and got back an address in the outer Sunset.

Well, it’s Sunday afternoon after 3 pm. Our meeting with Willie was the next day. We didn’t want to wait the gift until the day of the wedding; there would be too much else happening then. So, we headed out to the Sunset.

In the Sunset nowadays there are mini neighborhood centers all over. This was one of them. A block with a hip restaurant, a gift shop, a church, a yoga place, a surf shop . . . and another little shop with what appeared to be more gifts.

I still had ties on my mind so I was puzzled when I went in. I didn’t see any ties! Well, I was here, I might as well see what they had.

It wasn’t a gift shop, except in the very broad sense of the word. It was the shop of an artist couple: a painter and her print-maker husband. Their paintings and prints were all San Francisco themed. Sepi liked the one that was an image of a bear holding a map of California with the slogan ‘I Love California’.

(a draft from 4 days before the wedding. Amazing that I got even this much done. I was sure I had a photo of Willie and Sepi and the painting but I can’t find it.)

I made a solemn vow on Wednesday. Actually, I did it twice. I’ll tell why in a moment. But there was going to more until there wasn’t. That’s my main story.

Sepi and I had written a text for the ceremony and given it to Mayor Brown on Monday. He did his part perfectly with one small exception. He actually improved it with a short introduction that noted the history of City Hall as the people’s place and also that this was the first time a Mayor was performing a marriage of another Mayor there.

As he spoke the beginning words of the ceremony, I was locked onto his face. He looked up at the end of each line and it seemed like he looked at me every time. I felt like I could drown in his eyes.

But I also remembered that Sepi had told me she forgot her vows at the apartment. As it happened, I had brought mine to City Hall but hadn’t put it into my suit jacket. These ‘vows’, by the way, were more like personal statements that we each were going to make to each other in the presence of all the witnesses. I had written mine a few days earlier but Sepi didn’t write hers until Tuesday night. We kept them secret from each other.

The plan was to read these statements as we placed the rings on each others fingers. The actual vows were before that.

Here’s how it came down. Mayor Brown said to me, ‘Do you, Christopher, take Sepi to be your lawful wedded wife? To have and to hold from this day forward, for better or for worse, for richer and for poorer, in sickness and in health, to love and cherish for as long as you both shall live?‘

But he paused and looked at me after the first question so I said, ‘I do’, as loud as I could. Then he went on. Oops! So after he asked the second question, I responded again with ‘I do’.

Then he had the same exchange with Sepi. She responded with ‘I do’ twice just like I did. Then Willie went on to the ring ceremony. He spoke the words we had written about the rings after which it was going to be my turn to speak. I was trying to remember what I had written and how I was going to improvise something similar. But I also had been thinking I was going to have a handheld microphone to speak into. There was none in sight, just the little lapel mic on Willie. Compared to Willie’s beautiful baritone, my ‘I dos’ had sounded small and weak. How was I going to make my statement sound good?

Then Willie said to me, ‘Christopher, repeat after me. Sepi, I give you this ring.’ That was supposed to be at the end of my statement! He’s skipping my statement!

What could I do? I said, ‘Sepi, I give you this ring’, as loud as I could.  And we continued to the end when I said, ‘With this ring, I thee wed.’ He was rolling, it sounded great, and he went on to Sepi who put the ring on my finger and said the same words.

Then he turned back to the audience and said, ‘By virtue of the authority vested in me by the State of California as a Deputy Marriage Commissioner, I now pronounce you husband and wife!’

Last night as she was about to leave the reception, Ashley asked me what was the best moment of my day. I really couldn’t think of just one. It was all fantastic – in every sense of the word. In the past couple of weeks, I had used the analogy of the roller coaster ratcheting up the incline before the first drop. Well, yesterday was the drop.

I told her the moment when she and Jeremy pulled into the parking lot at Davies Hall was big. It meant that they were safely there. They were the last of my posse to arrive.

But there were so many more: standing under that dome on that staircase, looking into the soulful eyes of Willie Brown as he spoke those solemn words of commitment; having Ashley tell me that the song the band was playing was the song that she and Zach sang at her wedding reception using kitchen utensils as microphones; hearing the trio start as we were still down at the bottom of the stairs taking pictures; having so many people come up to me to say how happy I looked an how happy they were for me; it was all great. 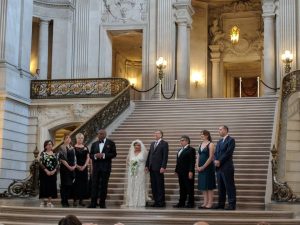 (Thanks to Lolly Lewis for this photo.)

This morning I remembered a moment that I could honestly say was the best. At the reception, it was pretty chaotic. People came in bit by bit and there was a lot of milling around while they found their seats. And of course everyone wanted to talk to us. We hadn’t set up a reception line. Then I started to hear people say they were hungry and when was the food coming out. This was near to 7:30 and the food was just then starting to come out.

I went and started filling a plate for Dad but Sepi came to me and said, wait, there must be a toast. then there followed several minutes of confusion while we looked for the champagne, the best man, the band. I got a little grumpy about then because I just wanted to let people eat.

Finally it was decided that we could do the best man toast later. All I had to do was welcome everyone and say that the food was ready. I can do that.

So I tapped on the glasses and the room started to settle down. I don’t remember if I spoke first to welcome everyone but there was cheering and I raised my arms and pointed to the ring on my finger and the cheering intensified.

That was the moment.

I spoke a little bit and Sepi said some nice things, but soon everyone was digging in to the excellent food and the party moved into high gear. 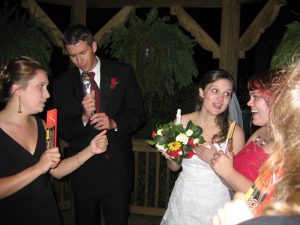