A couple of quick stories about Rosalie.

Last weekend, I was at Camp Greenville, flailing away at tree rounds with a ten pound (estimated) maul. About one swing in twenty resulted in a satisfying separation of the round into fireplace-ready pieces. The rest of the time, the maul either stuck in the wood, requiring enormous effort to remove it, or bouncd crazily away. Luckily, no one was harmed although later in the day I started discovering muscles I had forgotten about.

Well, anyway, at one point while I was flailing, Rosalie came over to watch. Her comment: ‘Try harder, Grandpa!’

Then yesterday, Ashley posted this gem on Facebook. I’ve already shared it amongst my co-workers at Davies.

Rosalie’s Answers (Almost 4.5 years old)
1. What is your happiest memory?
You!
2. Why do you like being a kid?
Because I just like being a kid. I DON’T like being a kid, actually.
3. One word to describe you would be?
Nothing. I’m not going to tell you anymore words.
4. What advice would you give your parents?
What did I say I was not going to do?

Here she is last Saturday explaining to an adult what Noah is doing down in his hole. 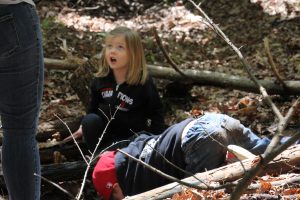